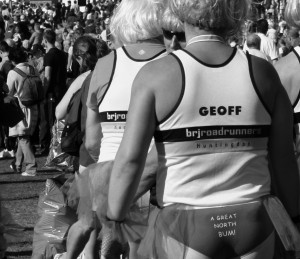 WITH one of my biggest missions for this year complete, it was time to get the ball rolling with the second one – to complete the Great North Run in September.

This will be my first half marathon and obviously isn’t something I can do last minute. It requires a bit of training and preparation, and a lot of motivation. So last week, the serious training began. I took the biggest step and completed the first run of my training plan – a gentle four miler.

In my first run in three months I struggled to keep going but somehow I managed to complete the four miles at a real push. This wasn’t bad going considering I have spent a long time eating and drinking like a pig and doing very little exercise to balance it out, but I knew I needed to be better if I had a chance of ever finishing this run.

I took a route that I had done many times before so it should have been simpler. But the route included two big hills and a few long stretches of flat road. I was convinced running up those hills again would finish me off, and it almost did, but once I set off I had no choice to run them. I really struggled to keep on going up the hills and no matter how hard I told myself to keep pushing, I reluctantly had to give in and walk up them instead.

It pained me to stop running and walk but it has made me even more determined now to keep up the three runs a week recommended in my programme. If I stick to it , hopefully soon I will be able to breeze through that four mile route and I will become a lean, mean running machine!

I am taking part in the Great North Run to raise money for Macmillan, make a donation at  www.justgiving.com/team-shoker