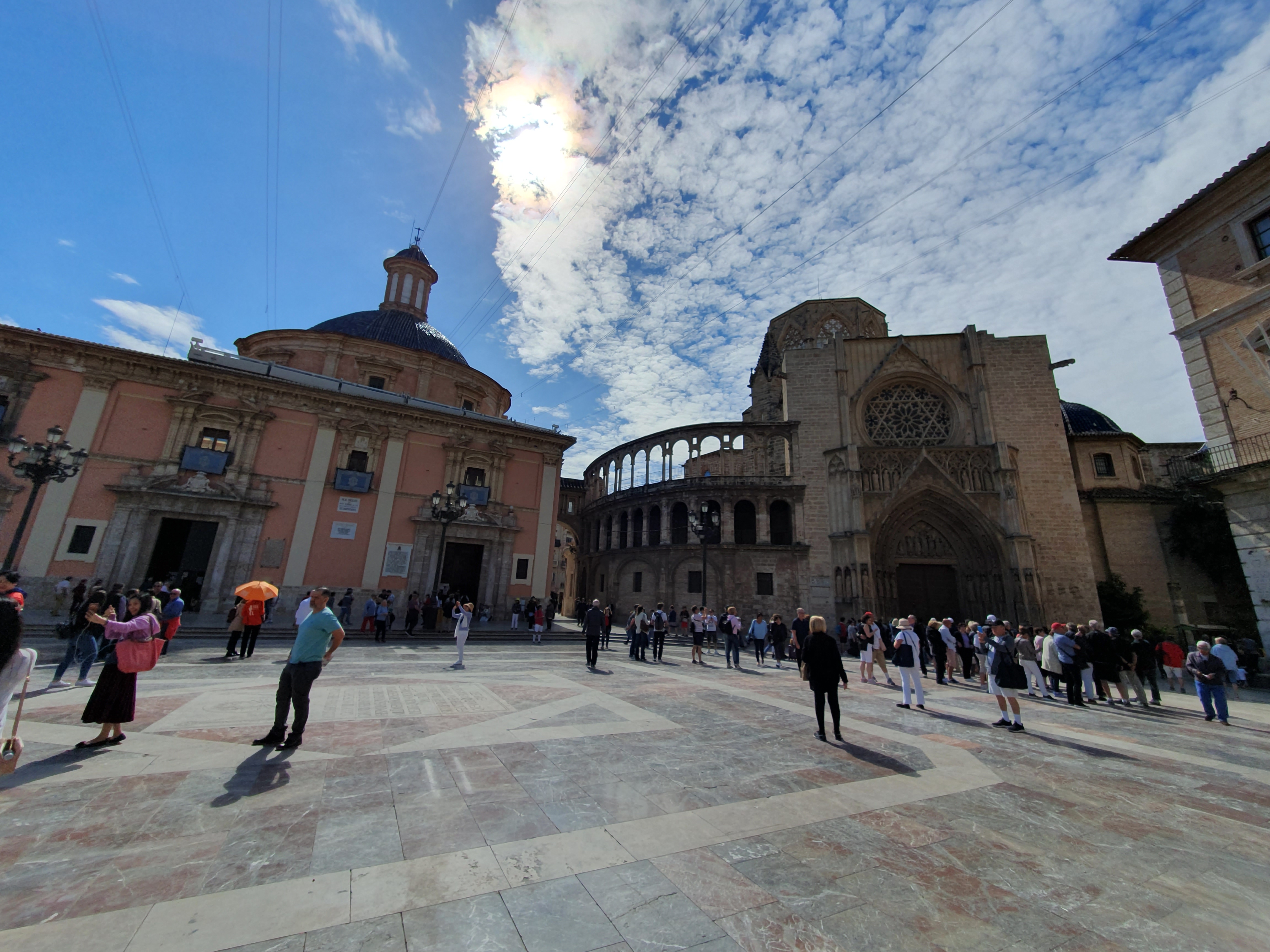 THERE is no doubt Valencia is a beautiful city with stunning big buildings, pretty squares, cobblestone streets  – all giving it a calm and relaxed charm.  It was easy to get lost among the little streets, but with the option of stopping for a gelato or coffee at every corner to gather your sense of direction, you can soon feel at home in this friendly city.

Arriving  on a Saturday night for a girls weekend, the first thing on the agenda was to find some tapas and wine.

It didn’t take us long to walk into an area with a selection of bars full of people and find one offering a range of tapas (with me being an awkward vegetarian that’s not always easy abroad). And it wasn’t expensive – five tapas dishes and three glasses of wine for around €20 felt like a bargain.

There was a relaxed atmosphere in the city where we felt safe walking around. No big crowds or rowdy drunks wandering the streets, no loud noise from bars and clubs, or traffic-filled streets. There wasn’t the usual hustle and bustle in this area which you would expect in a big city on a Saturday night – or at least we didn’t find any in this area. Instead there was an air of calm sophistication as people socialised and sipped on good wine on a warm evening.

Unhelpfully I didn’t note the name of the area we were in as we were so desperate for food we stopped at the first decent place we saw that was still serving.  No doubt there is other parts of the city that would be more lively on a weekend, but we didn’t come across those and were happy with the relaxed vibe after an evening of travelling.

Dinner was topped off with dessert and of course I had to try the local delicacy – torrijas. A kind of Spanish version of French toast soaked in a cinnamon milky custard. Delicious!

With a full day of sightseeing planned, we were up early for a free walking tour of the Old Town and picked up a light breakfast of coffee and a fartado (a Valencian-style doughnut) on the way.

Walking tours are my go-to for a quick and easy way of seeing the highlights of a city when you’re short on time. I would definitely recommend them to anyone heading off on a city break and they’re helpful for learning some history and culture from a local along the way.

The tour started in Plaza de la Virgen. The most important and historical square in Valencia, home to an amazing fountain, the huge Valencia Cathedral, and the Basillica de la Virgen. It’s a great place to people watch and admire the impressive architecture and huge doorways around you.

We walked along the Serranos Bridge and saw the Serranos Towers which are the remnants of the city’s ancient city wall. You can climb up these, but be mindful of the opening times as we found the gates closed when we returned at 4pm on a Sunday.

The walk took us to plenty of squares each offering an abundance of cafes and places to relax in between sightseeing and market stalls for souvenirs, before heading to the the La Lonja de la Seda – a Gothic UNESCO site which was originally used for trading silk and has restored to show its elaborate details and design.

There are some lovely restaurants and cafe around here which is where we spotted an outdoor restaurant offering a lunch deal on paella and sangria. How could we resist?!  The choice of paellas was brilliant with the traditional offering to others with just chicken, or seafood and also vegetarian, which is rare and was much appreciated.

We walked back to the hotel via the Jardins del Real – a lively inner city park with play areas for kids which hosts concerts and events in the summer.

In the evening  we visited the El Carmen district. A lively part of the city with trendy bars and restaurants and where the young people in Valencia come to socialise. There were plenty of seating areas outside each bar although we did struggle to get served at a few places before we eventually moved on and found one where staff weren’t too busy to take your order.

On the way we drove past the stunning train station which was a work of art in itself and the Plaza de Toros an impressive amphitheatre used for concerts and bullfighting three times a year. It was good to get a quick taxi tour of sights we had missed in the walking tour which is ideal if limited on time.

It was great to see lots of green space in Valencia. In particular a huge traffic-free garden that runs alongside the Old Town. The Jardin del Turia is 9km of foot and cycle paths, football pitches and children’s play areas which is certainly rare in a major city. It is said to be one of the largest urban parks in Spain which passes under many of the city’s bridges and was created from the old riverbed which was rerouted after the city flooded in the 1950s. A brilliant innovative use for the empty space which I’m sure could be taken on by many other cities around the world.

Along this park you come to the City of Arts and Sciences – an amazing series of modern, innovative buildings which house a science museum, other exhibitions, pools and an aquariaum. Unfortunately on the day we visited large parts of the attraction were closed for the filming of a big TV show but we still managed to spend an hour or two walking around the outside, which was enough for us.

From the outside alone you can get a real sense of the enormity of this site and still have plenty to admire. I just loved the striking, modern designs around the different parts of the buildings, which were even more striking against the backdrop of a beautiful blue sky.

From here we caught a bus to the Port of Valencia for a wander around the marina and beach. With our limited Spanish and Google maps it was easy enough to figure out which bus to get, and at just €4.50 for all three of us to take a single trip, it was a steal.

Being a gorgeous, sunny Monday it was perfect weather to get out of the city and breathe in some fresh sea air, and it wasn’t busy either, almost feeling like we had most of the beach to ourselves. Sitting there taking in the sea breeze it was hard to imagine the main city was just a short distance away.

The promenade at Playa de la Malvarossa is spotlessly clean and litter-free making it a great spot for a refreshing walk, cycle or segway, before finishing off a trip to the beach with a meal at one of the many restaurants with a sea-view.

This was the best way to end our flyby visit to Valencia. The carefree and laid back lifestyle in the Spanish city suited the kind of weekend break we were looking for, it just wasn’t long enough!

A city often overlooked by Barcelona and Madrid, it had so much more to offer and much fewer tourists getting in the way everywhere you went. If you’re a fan of those cities and had not considered Valencia as a weekend getaway before, then now is the time to change that and get it on your list. You won’t regret it!

2 thoughts on “Sun, sangria and paella: 48 hours in Valencia”