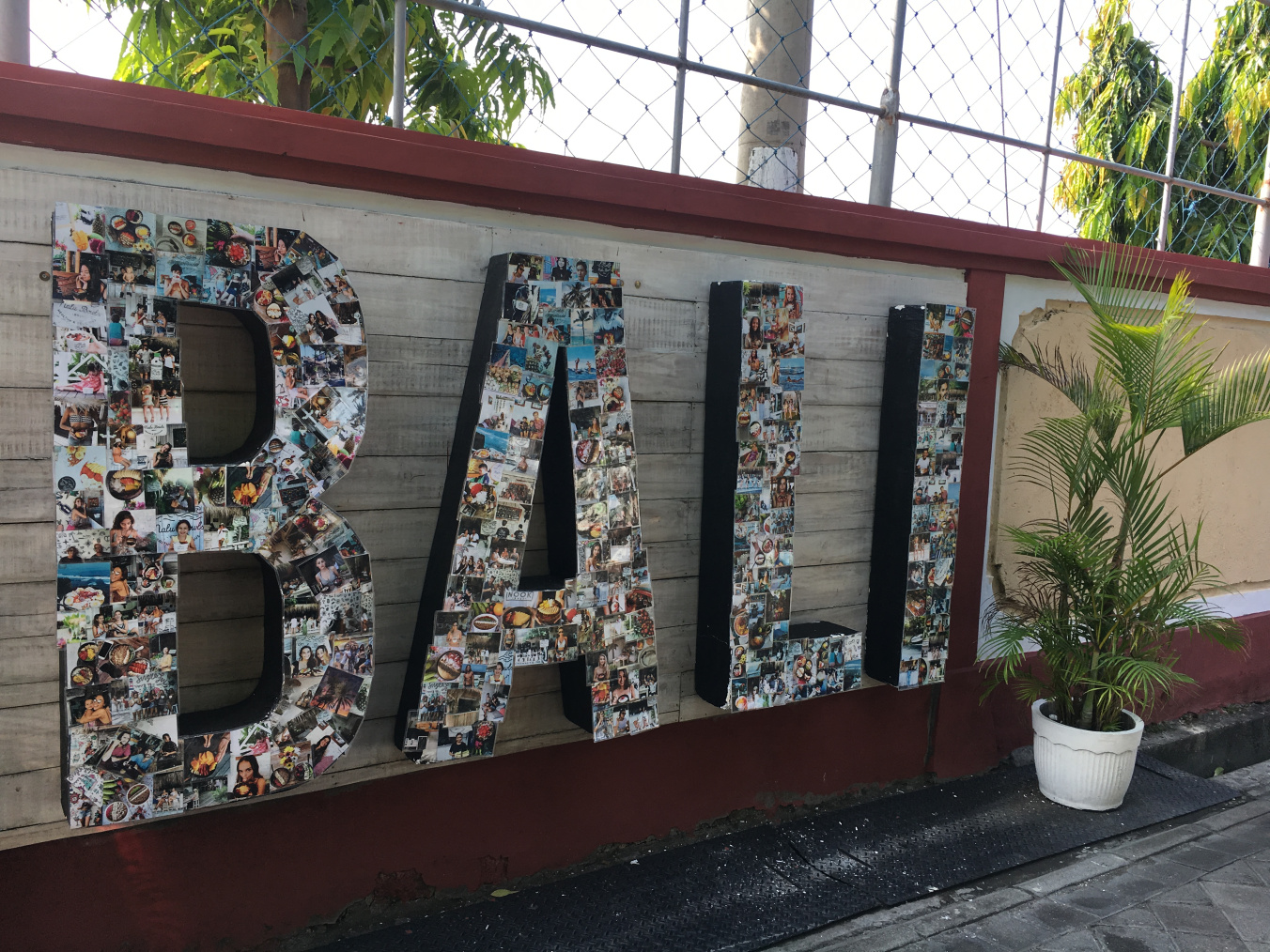 “Seminyak was my best ever holiday,” said one friend who visited on his honeymoon.

“Avoid it at all costs,” said another, who has visited Bali several times.

Such mixed reviews left me confused about whether I wanted to wanted to spend the last five days of my Bali trip here, or even visit Seminyak at all.

Having spent several days sightseeing around Ubud, and another three chilling on Gili Trawangan, I was eventually persuaded this part of the island would be good for a different atmosphere and a bit of partying to end our trip.

What I didn’t factor in was just how many karaoke and sports bars there were going to be, as well as overpriced, average restaurants and overcrowded beaches.

Aside from its slightly funny name, this is a swanky must-see beach club. It’s big and the food and drinks are pricey by Bali standards, but it offers an all round luxury holiday experience.

Prepare to have your bags searched at the entrance and to leave any food or drink you have on you behind. Entrance is free to get in so you can spend as much or as little money as you want inside, but for this reason it is popular with holidaymakers and you’ll have to get here early to grab a seat.

Benches and beds fill a well kept garden and surround an infinity pool overlooking the sea. And as a DJ plays music in the background, there is a great, relaxed vibe around the club. We visited in the afternoon, which was the busiest period but sitting on the edge of the pool, dipping my feet in with a refreshing coconut water cocktail to sip on made for a perfect afternoon.

This is probably one of the most famous temples on this side of Bali, and positioned on the edge of the island, offers some lovely sea views. It also offers an evening fire dance  (Kecak Dance) which makes it popualr at night fall.

This is a total tourist trap with hundreds of people arriving at the temple at the end of the day, but it is still worth a visit.

Having arrived an hour before the dance we had a wander around the temple grounds then squashed ourselves into the arena for the performance overlooking the cliffside. On the advice of our driver we headed to the amphitheatre half an hour before the start time in order to get ourselves a seat higher up facing the sea. It meant we weren’t forced to squeeze in or sit on the floor and could happily watch the performance with the sunset as a perfect backdrop.

This was the most amazing food discovery I made during our time in Seminyak and loved it so much I went twice.

On the first trip, craving something healthy, I tried a tasty smoothie bowls from Nalu Bowls. And the vegetarian lunch from Shelter Cafe upstairs looked so tempting I returned another day for lunch. The milkshakes are a must-try too.

This type of cafe is more like what I had expected from Seminyak, and I’m surprised we didn’t come across more, but I probably needed a bit more research to hunt these kind of food places out.

We had definitely seen our fair share of sunsets on Gili T but on Double Six Beach and La Plancha we were treated to more colourful shows in the skies every night. And it attracted massive crowds too, with everyone trying to grab their best sunset shots.

At every bar and restaurant along the beach you can grab yourself a colourful beanbag overlooking the sea just before 6pm, order yourself a cold Bintang and sit back to enjoy the spectacle, with an acoustic singer strumming away on their guitar in the background. It was pretty blissful and a great way to relax but I wonder if there is such a thing as sunset overload?!

The downside to having beautiful sunsets is having to dodge the big crowds, which can only get worse in peak season, and all the annoying drones. Despite there being signs everywhere that drones are not allowed on beaches, it is not regulated and people ignore them. So while you sit there trying to relax and soak in the atmosphere at the end of the day, you will have to put up with a noisy, little motor hovering above your head and runing the serenity of the moment.

Which leads me to….

Compared to Ubud there is not much sightseeing to be done in Seminyak.

If you’ve not already had your fill of temples there is Masceti Temple by the beach but it is small and doesn’t really offer anything different or more spectacular than other temples on the island. You will be charged to go in and asked to don a sarong, but that all took longer to arrange than it did to walk around it.

Once inside you will be faced with this elaborate structure but there isn’t much else to see. You’ll be in and out in 10 minutes which wasn’t worth the entrance fee.

2. Some of the beaches

The Petitenget Beach is opposite the above temple but it was very empty and left me underwhelmed.

The beach, while sandy and quiet which I would normally love, was filthy and smelt of sewage with streams of some kind of liquid running from the hotels into the sea. We could only imagine what it might have been and tried to jump over it to avoid dipping our feet in. The sea was pretty rough too and red flags were out warning of hazards so you couldn’t do anything more than paddle your feet.

This section of beach sits near the lavish Potato Head Club and W Hotel and several other luxury hotel resorts. It might offer some lovely sunset views without the crowds, but I imagine anyone staying in any of the expensive hotels would opt to stay poolside to enjoy the view and in turn avoid the rubbish.

During a day trip we visited Padang Padang Beach. It’s a small beach in a rocky area popular with surfers and paddleboarders. It’s also the beach featured in the romantic book and film Eat, Pray, Love where Elizabeth Gilbert falls for the Brazilian hunk.

Knowing this and seeing the photo above, you would think this was a beautiful, peaceful beach. Yet I have cleverly not managed to get a single soul on the heaving beach in the shot and I was disgusted to see tubes of toothpaste, shampoo bottles and face wipes floating around me in the sea.

Seeing all the rubbish and people’s sheer disregard for the environment and wildlife ruined the beach experience for me and shattered the whole illusion of Bali as a paradise destination. It was upsetting and made me wish some people had a better appreciation of the nature around them.

The same day our driver took us to Blue Point Beach. Seeing cars and bus loads of people arriving we expected to see something similarly busy and spectacular.

There’s a long walk down to the beach from the car park so we headed down with our towels and ice lollies in hand. Then we walked across a path between tightly packed in shops and cafes and eventually came to a small, rocky cave, with only just a gap between two large rocks where you can see the sea.

The waters here were very rough and the area was more an access point into the sea for surfers rather than a beach. Anyone hoping to chill on a sandy beach, would be very disappointed, like we were. So having walked all the way down to just stand in a cave, we marched back on up and headed onto our next stop.

Compared to the rest of Bali, drinking in Seminyak is not as cheap as you expect it to be.

I had been warned about drinking spirits and cocktails in Bali because you can’t guarantee what you are being served is a genuine spirit. Indonesians make their own alcohol which can be dangerous to people not used to them. As a result, imported spirits are the safest to drink but you will be charged a lot more.

While it might still be cheaper than what Australians are used to paying for their favourite cocktails back home, it’s not as cheap as other holiday destinations. And the local beer is without a doubt the best value….unless you’re in an all-inclusive resort of course in which case drink all the pina coladas you can manage!

Overall I was left underwhelmed by my visit to Seminyak. There’s no doubt that everyone has a different holiday experience but mine did not live up to the expectations I had probably put on it, or match the other beautiful places we had visited during our time in Bali.

Where Ubud and Gili T had left me admiring the natural beauty and feeling like I was holidaying in paradise, Seminyak was a reminder that no matter where you go in the world, there is always a tourist strip heaving with people, souvenier shops and average restaurants, leading to a jampacked beach.

It’s full of Australians looking for a cheap party holiday and I’m not sure it’s an area of the island I would return to in a hurry. Maybe thanks to things like Instagram it’s gained popularity over the years as some areas can look beautiful on a photo. But looks can be deceptive and it just wasn’t my cup of tea.

2 thoughts on “The best and worst of Seminyak”