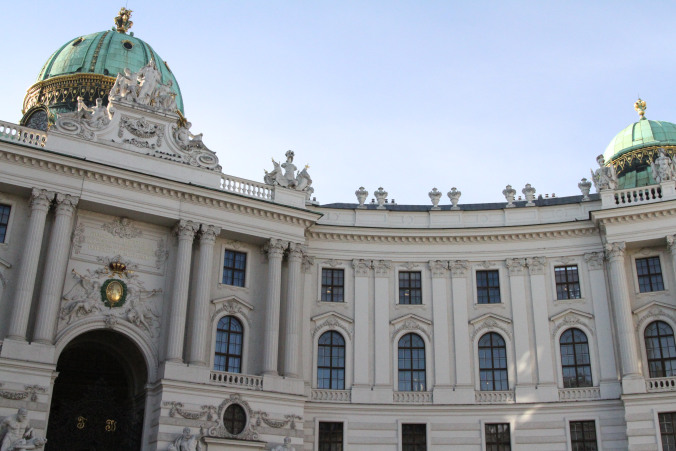 Whether it’s in your hometown where you know exactly what every building looks like  from top to bottom, or in a new city where every corner offers up a new surprise, I’m a firm believer in always remembering to look up.

And Vienna is definitely a city where you need to glance upwards. The buildings are so big, grand and beautiful, it would be stupid not to . From the Michaelertrakt, Rathaus and St Stephen’s Cathedral to the Austrian National Library (which apparently looks even more intricate inside but we didn’t go in) the city’s architecture make it one of the most photogenic cities I have visited in a long time. Even the high street shop fronts and cafes are some of the most elaborate I’ve ever seen.

During our stay we booked into The Harmonie – a trendy, boutique hotel in the 9th district which was off the beaten track but still in a central location. The staff were friendly, particularly the super efficient breakfast manager, Kumari, who deserves full credit for her enthusiasm greeting with you a loud “good morning” and remembering your drink order every day. The hotel even offers a daily afternoon tea for its guests between 3pm and 6pm with a selection of teas and two different cakes. It was a perfect (and delicious) way to rest the legs and warm up after a day of walking.

It’s no accident that Vienna is the home of the famous Sachertorte – a rich, dense chocolate cake and you don’t have to walk far to come across a cafe with displays full of cake and coffee. The daily dose of cakes at breakfast, lunch and early evening seemed the best way to spend a holiday, and I almost wish I could’ve carried the diet on once I got home.

One day we stopped at Cafe Landtman near the Rathausplatz for coffee and lunch. While the Viennese were dining on soups and scnitzel for lunch we opted for sandwiches and cakes. But we soon learnt sandwiches in this country meant 5€ two small slices of a baguette with your choice of topping. Not exactly a British idea of a sandwich.

Vienna’s most famous cafe is Cafe Central. Every day from 10am onwards a queue forms outside and stays for much of the day. We opted to try other cafes each time but still curious to see what the fuss was about we joined them on our last day. The cafe was much grander than we expected and a lot bigger than it looks from the front. It seemed outrageous queuing in the cold for 30 minutes to just have a hot drink and an afternoon snack, but the hot chocolate and four cakes we shared were undoubtedly worth it. If not a little extravagant and expensive – but we didn’t care!

Many people will say you can’t make a visit to Vienna, without watching an opera and unless you’re super organised, the chance is tickets will be sold out months before your trip. But queuing for standing tickets, if you’re prepared to stand in the cold for up to three hours beforehand, still makes it possible to watch a performance.

Every day, 80 minutes before a show starts at the Vienna State Opera House (Staatsoper) around 400 standing tickets go on sale at a much, much cheaper price (for just 3/4€ in fact). At that price, if you’re a tourist just wanting to have a look inside and get a feel for the experience, you don’t have to feel guilty about not wanting to stay past the interval.

Mozart’s Magic Wand was showing the day we visited and after a day of walking around the city in the freezing cold, wearing jeans, trainers and jumpers we were very under-dressed for the occasion. But we weren’t alone and there were a few hundred others just like us so nobody judged you for it.  At the price you pay for your ticket you can’t guarantee the best views but we were lucky to get a good , unrestricted spot with a screen in front to translate the show into English.

But despite the translation we were still left a little confused by the ridiculous storyline, bad acting and minimalist production. I’m not sure if I’d have been happy paying 200€ for a show like that, but at less than 5€ we couldn’t complain too much.

Another important building you can’t miss seeing on a trip to Vienna is the Schonbruun Palace. It’s a little further out of the city so can be reached by bus or metro. We took a metro which was easy enough to work out and got of at the stop of the same name. Once outside the station it’s easy enough to figure out where you’re going. Just follow the crowd as everyone seemed to be going to the same place.

You can easily spend a full day here if you want to go inside the palace, greenhouse or zoo and it’s recommended to pre-book online to avoid the huge queues at the entrance. But the gardens are free so we took in the view from outside and went for a wander around the grounds, which would be much more beautiful in warmer weather. The visit wouldn’t have been complete without a walk up to the Gloriette for stunning views over the palace and the city of Vienna behind it.

We visited Vienna in the days after Christmas and it was great to experience a New Year’s Eve somewhere new. I usually hate going out for dinner or drinks on this day because it’s overpriced, bars and nightclubs are usually empty, and it’s rarely fun. But this was the first time I had experienced a street party with fireworks for NYE.

Vienna had seemed fairly quiet since we arrived and the streets had even been empty on a Friday and Saturday night which seemed odd for a capital city, but as soon as New Year’s Eve came around, the streets were full. It seemed everyone had been saving themselves for this day. From 11am there were already crowds of people wandering around the city donning their colourful headgear and crazy glasses. The city was ready to party!

I’ve never seen a street party like it. Following a winding route around the city’s main streets were 12 stages of music to suit every taste, street food of every kind, stalls selling you all the silly hats you could want and of course mulled wine.

We spent a good few hours singing and dancing along to everything from big brass band and classical music to some old skool 90s dance music, and no matter the genre people were waltzing tpgether everywhere. It was brilliant to see! There was a great atmosphere and everyone was in great spirits. It wasn’t as crowded as I had expected and we walked around freely until we headed to the Rathausplatz where the big fireworks display would be. It was here we had to squeeze our way through people but we didn’t have to endure it for long.

Soon enough it had hit midnight and we experienced the biggest firework display I had ever seen (or at least can remember seeing). Fireworks were coming from all directions – to the side of the Rathaus, behind us and even from behind the Rathaus. It was a wonderful experience and a fantastic way to end our trip to Vienna.