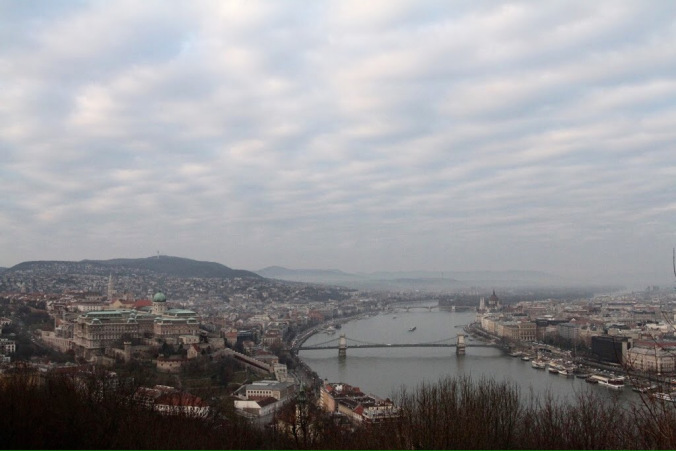 You’ll struggle to find anyone who has been to Budapest and has a bad word to say about the Hungarian capital.

Everyone has tips and advice of where to go and what to do. “Make sure you visit the Royal Palace” said some, “go to a ruin bar” said another, “definitely visit a bath” said others.

In fact I heard about so many good things I maybe tried to fit too much in. And after four days of walking the city I went home with two tired legs but a heart filled with beautiful buildings and a camera full of photos.

The advantage of visiting Budapest in December is you get to experience a Christmas market with mulled wine and schnitzels. There’s festive lights everywhere and the cold makes it feel even more Christmassy. Having visited the Christmas markets of Zagreb last year these weren’t as impressive but the atmosphere was still there. The main market was in Vorosmarty Square where I picked up a potato pancake with a roasted vegetable topping. There was a choice of spinach gnocchi, chicken or beef goulash topping too, or hot dogs, or chimney cakes if sweet foods are more your thing.

From here we headed to the Jewish Quarter to visit Szimpla Kert, one of the first and most famous ruin bars in Budapest. It’s not exactly where the locals hang out and was full of tourists, but it’s still worth a visit if you want a taste of a ruin bar and see how they operate. If that’s not to your fancy and you want something more authentic, there are many more bars in the area, it’s just a matter of looking out for a crowd.

Heading to a new city I like to see if there’s a walking tour. It’s a great way to see a whole city in a few hours if you’re short on time, but they’re also informative and often free so you tip at the end what you think it’s worth. We joined the Trip to Budapest walking tour and it was great.

Leaving from Vorosmarty Square our tour took us past the main buildings on the Pest side, gave a bit of history about the city and crossed the Széchenyi Chain Bridge to the Buda side to visit the Royal Palace and Fisherman’s Bastion. It was a quick whistle-stop tour of the city and helped us get our bearings. We’d covered a lot in just three hours.

The city looks simply stunning at night with all the major buildings lit up in a yellow light. It makes any dull government building or museum look more important and definitely worthy of a photo. Although the Széchenyi chain bridge and Parliament building look impressive at any time of day they just sparkle at night. To get more of an idea of what the city looks like at night you can take a cruise along the Danube. Just remember to wrap up warm.

Walking back through the city we found ourselves along the Gozsdu Udvar – a covered street full of bars and restaurants which was bustling with people and filled with music. Budapest is a city full of history and culture but it’s also a lively city at night.

To get our Sunday off to a relaxing start we headed to the Gellert Baths. This thermal bath was recommended for convenience but also because we wanted one that was traditional and popular with the locals as well as tourists. It was decorative, elaborate and a great place to  There were warm spas, even warmer ones, hot spas, even hotter spas, and outdoor pools for the brave. We paid for a locker (basically a cubicle) that was ours to change in and keep our clothes and bags in, although you’re recommended not to take any valuables with you. And you’ll need to buy a cap if you’re planning to use the swimming pools.

For the evening we headed to City Park where Heroes Square is all lit up and an ice rink was situated at the bottom of Vajdahunyad Castle. There was a small Christmas Market and entertainment offering the chance for a mulled wine and to warm up.

Hungry we stumbled upon a restaurant serving traditional Hungarian food. I ordered a vegetarian letcho with egg. It’s a stew of cabbage and other vegetables, usually made with sausage, sprinkled with onions and chillies. While simple and relatively bland, it was tasty and a great chance to try some local food.

Walking off dinner we headed back towards the Jewish Quarter and happened to come across a trendy ruin bar. Ankr’t Bar was hidden behind a big curtain and we only saw what was behind it because a group were leaving right as we walked by. Another bar inside a derelict warehouse it seemed like the kind of place where the young, hip locals hang out. Just a few doors down is Tuk Tuk Bar – one of most rated bars in Budapest. It’s small and cosy but expensive compared to others, and the cocktail was tasty.

Margaret Island in the middle of the river was walking distance from our hotel. So many people had raved about this huge park popular with runners, picnics and couples for romantic walks and it seemed right to go have a look. It’s a vast open space with lovely gardens and greenery but on a December day it was grey, empty and cold. I can imagine it would look wonderful in summer and offer up a great afternoon out.

With still one tourist attraction left to tick off the list we got a bus to the Citadella / Gellert Hill for great views over the entire city just before the sun set for the day.

With just a few hours left to catch our plane, the trip could only have ended one way – with a hot chocolate and cake. If you do one thing during your Budapest visit you must visit one of the city’s elaborate and ornate cafes. There’s several to choose from but we headed to Cafe Gerbeaud in Vorosmarty Square for our treat, tucking into a rich peanut butter and chocolate cake and sipping on pure milk chocolate.

Budapest may have been hectic and super cold but it left a sweet taste in my mouth and a desire to visit again in warmer weather .

Where we stayed: Hotel Victoria – Overlooking the Hungarian Parliament Building from the opposite side of the River Pest.