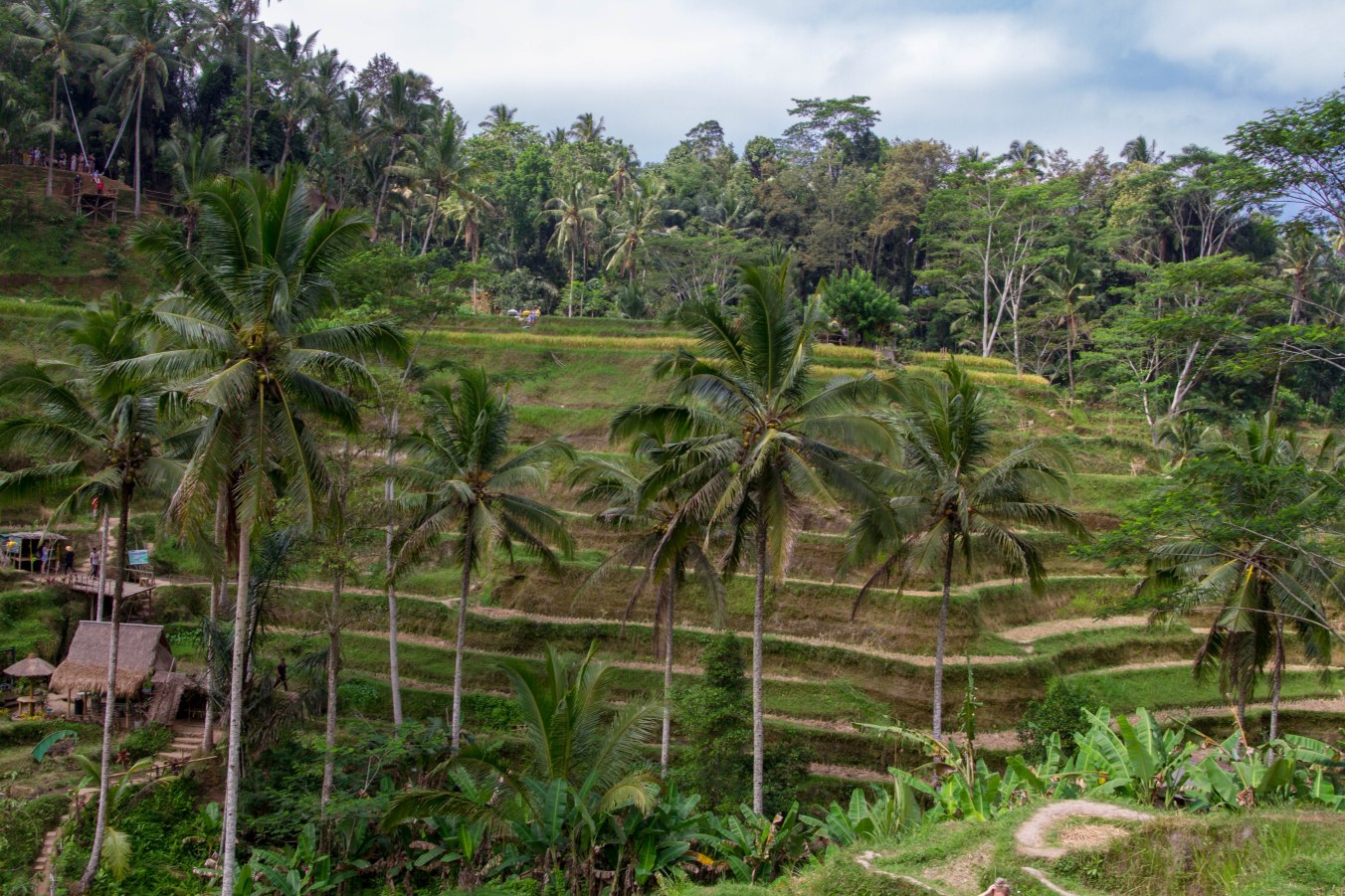 The lure of Ubud is in the greenery, the serene rice fields and the opportunity to really stay among Bali’s natural landscapes.

We booked a villa surrounded by the paddies just a 5/10 minute drive from Ubud Town and hired a car to get around rather than relying on taxis. But for this we had to tackle the erratic driving of locals in cars and on scooters, the steep and narrow roads, and dodging stray dogs and pedestrians.

If you’re thinking about walking to the town, there are no streetlights and very few pavements so make sure you go armed with a torch and watch out for cars speeding round bends.

The town was busy and bustling with tourists which was the complete opposite of where we were staying. There was so much going on that getting away to our villa on the outskirts suited me just fine. And we got to wake up to the views of the sun rising over the rice paddies which was stunning.

With only four days in Ubud we fitted quite a lot in.

The area is huge and you could spend a day walking around the terraces but after a while the view seems the same around every corner.

Watch out though that even if you purchase a 10R ticket from an office in the car park (which no-one checked), this only takes you to a small area by the entrance, and a further donation is required to get to the main terraces. All of this was a little confusing and there is no clear information for tourists, but the formations are worth seeing.

You can certainly get some beautiful photos at this spot and it’s here you will find several big swings, made famous by Instagram. The locals are definitely cashing in on this obsession and advertise it around every corner. It might now have become a clichéd thing to do in Bali but it was good fun, and was about as adventurous as I got on this holiday.

This was the first of many temples we visited. There are several rules about visiting the Balinese temples which I recommend reading before you go, and this is one of those that requires you to grab a sarong (free of charge) before entering. Even women in maxi skirts and men in long shorts were required to wear them so be prepared to wrap one over your clothes, which can get hot and uncomfortable after a while.

The problem with many of these temples are that, unless you’re Balinese, many areas are off limits. Despite this, there are some beautiful statues to see and plenty of elaborate doorways to have a photo in front of. I was in pretty door heaven!

When you arrive this is sold to you as like a sanctuary, and there are signs throughout the site to remind you the elephants are well looked after and kept in good conditions, but there is just something about this park that didn’t feel very sanctus.

To me, it felt more like a zoo. We couldn’t walk around as much of the park as I thought we could with general admission and you could see elephants chained to the ground or with seats constantly attached to them, behind the fencing so they weren’t free to move around.

The park assured us this was crucial to keep the animals safe but I just felt uncomfortable seeing it. In one secluded area we saw a young elephant that on first glance seemed like he was dancing, but I was informed later that it meant he was actually distressed.  We saw them performing tricks which they had clearly been trained and forced to do with the bribe of food such as painting, putting flowers around people’s heads and kicking footballs. I just had a bad feeling about it all.

This is the closest I had ever been to elephants and while they’re beautiful creatures who are fascinating to watch, I enjoyed touching and feeding them, but it was tinged with sadness.  The experience was nothing like I had expected at all and I regretted giving them our money. It was a lot to pay for a disappointing visit.

This is a scenic waterfall worth a visit. If you’re brave enough you can swim in a small area but be prepared to have a lot of other people joining you as well. This is a bit of a tourist trap and not a serene waterfall so don’t expect to be the only ones there. It is still a lovely bit of nature to see.

There are plenty of places to grab a cold drink (or a Bintang beer) and an ice-cream when the heat gets too much. But there are a lot of steps down to see the waterfall, which are great until you have to walk the 165 steep steps back up.

After a wrong turning we eventually used the Maps.Me app to find our way to this path. It’s practically hidden behind the Warwick Villas in Ubud Town and within minutes you are away from the noise of the cars and scooters and among the greenery again.

This is a popular stretch of path for cyclists, walkers and runners offering a mellow hike with gorgeous hilltop views. We only managed about an hour walk along here before our tired legs gave up having walked a lot in one day but it would probably take you two hours to walk the whole stretch.

I never imagined Ubud to have so many steps and to be so hilly but our thighs definitely felt it and took a battering while we were here.

We booked this locally as a sunrise trek which did include a painful 3am hotel pick up but trust me the views are worth it. After a pancake (we only get one!) and coffee stop we reached the bottom of the mountain at 4:30am. Torches, bottle of water and a takeaway breakfast in hand we set off on a steep concrete road with the aim of getting to the top before 6am.

It was a true challenge doing this trek and was made harder by doing it in the dark. The hike up was rocky, sandy, steep, slippy and I sometimes needed a helping hand to scramble up the rocks and pull myself up. While walking boots would have been sturdier, I wore regular running trainers and did slip occasionally, but they did the job. Having said that, I spotted an immaculate looking woman posing at the top in designer jeans, leather jacket and flip-flops with a perfect face of make-up, while the rest of us were dishevelled, sweaty and covered in dust.

We made it to the top in time for the sun to come up and it was breathtaking. It felt like a real accomplishment and made all the more satisfying knowing how tough it was to get there. We even had time to sit at the top, eat some food, and take it all in.

I had wondered if going back down would be easier once it was light, but it was just as hard, if not more difficult because of the amount of slippery rocks and sand. And with everyone leaving at the same time it took us longer to descend.

Our guides, who walked up and down this mountain five or six times without getting bored, were amazing and clearly super fit. It astounded me how they just ran down while the rest of us were stumbling and concentrating on every footstep. And one of them said he sometimes climbs up the mountain in 30 minutes, which is just incomprehensible.

For anyone worried about whether they can do this trek, it is tough and challenging because of the height you climb, but there are plenty of chances to stop and catch your breath, and the guides who will stick with you. Anyone who is reasonably fit won’t find this too difficult, but it is certainly do-able for anyone who enjoys a personal challenge. You won’t regret it!

Even better is that by 10am you can be back at your villa having breakfast and have an afternoon ahead of you for relaxing with beers by the pool.

On our final day in Ubud we drove out almost two hours to the oldest temple in Bali.

It is not on the regular tourist path and I read very little about it in the ‘top things to see’ lists I researched. But again, thanks to Instagram it is becoming a more popular spot for visitors. The drive is beautiful and picturesque but very windy, narrow and steep at times. Just make sure you stick to the main road from Ubud and don’t follow the sat nav/Google maps down some dirt tracks like we did for a short time until we decided to ignore it and turn back round onto the main road. Some of these apps get very confused around here.

The temple is clearly not used to having big visitor numbers yet as there is only a small car park for a few cars, but we visited on a holy day and it was extra chaotic trying to find a parking spot. Once inside the site, there are five/six temples to visit, which can take you the best part of a day to see them all. We were also told some of them were about a 45-60 minute walk apart. However because of our late arrival and an imminent rainstorm, we didn’t have an entire day to walk around.

Having said that, most people are there just to see the Gateway to Heaven which is the first thing you see. It’s right by the entrance and you walk up some steps to get to it. There is even a queue for people waiting just to get this shot:

Naturally we joined them, and for anyone wondering…..the reflection is not real. Sorry to spoil the secret but the temple staff hold a mirror card to the camera lens to create the illusion of a water reflection. In reality, the ground is just very dry and drab looking.

If you’re lucky and it’s a clear day you can just about see Mount Agung in the distance behind the gate. Unfortunately on the day we visited, it was very cloudy and you couldn’t get a clear view of the volcano but you can just spot a corner of it.

Thanks to social media I can see this temple getting a lot more visitors in the years to come, but I’m not sure if it will be able to cope. Some people come just for the gateway photo and leave straight after which seemed a big waste of time. In fact the statues here were some of the most intricate I saw on the entire trip, and because of how much space there is around the temples, they were some of the biggest.

Keep it as a base

There’s many other things to see in Ubud including the Sacred Monkey Forest which we passed on because of a lack of time. There is the main temple in Ubud which hosts traditional dance nights and if you have time there are several other temples and lakes you can drive to from here.

This was the part of the Bali trip I was most looking forward to and it was beautiful with lots to see and do, but I also left wondering whether I should have spent longer there. Having visited other parts of Bali and realising this was where I felt most comfortable, if I was to return, Ubud is maybe where I would stay for the entire trip and just take day trips to other places.

This felt to me like the true Bali and with still lots more for me to explore one day.

2 thoughts on “Ubud: The essence of Bali”