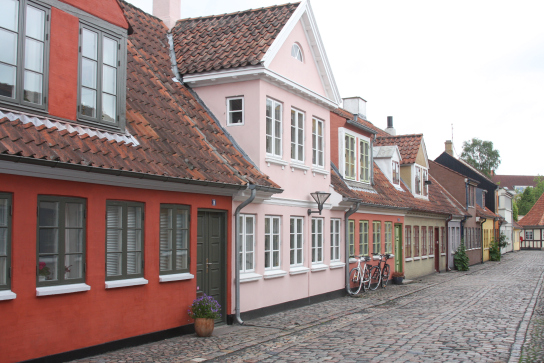 THE tiny cobbled streets of a busy Danish city like Odense is enough to make you smile. The colourful houses look like they should belong in a fairytale and the quirky features of each house makes them look almost unreal but the bikes propped up outside and names above the door remind you that these are people’s homes – and you are of course driving in Denmark.

Home of fairytale author Hans Christian Andersen this city has an enchanting atmosphere which is reflected in the statues dotted around the city and in Odense’s main park – fairytale park.

It is while sitting here on a bench here that I realise why the Danes have a lot to smile about.

There is not a single obese person in sight, we only saw only one McDonald’s for miles, everyone seems to cycle or jog everywhere, they are outdoorsy, active people and everyone seems to radiate a kind of happiness you rarely get anywhere else.

The shops in this part of Denmark close at 2pm on a Saturday and open when they like on a Monday. Instead of rushing around the shops all weekend people spend their spare time actually relaxing and doing other things – drinking with friends in cafes or bars, fishing or spending time with family.

The highways only have two lanes and keep flowing without middle-lane hoggers and parking is pretty much free in cities, making driving in Denmark a blissful experience. In fact a weekend driving around the  Trekanten (Triangle) region of Denmark was both tranquil and energising as we visited three very different towns.

Along the route, in Vejle, we got a taste of the local Smørrebrød (a traditional Danish open sandwich), a drive around the beautiful fjord and a look at the famous Bølgen built on the edge of the harbour. The huge wave-like building is one of the most amazing designs I have ever seen for an apartment block. Nothing would ever be built like this in the UK for fear of it being too different, but this just emphasises the Danish love of architecture, design and not fitting the norm.

A short drive from Vejle is Kolding. A much smaller town this offers the same quirkyness and beauty. The buildings are colourfully painted red and yellow, they are slightly wonky sometimes or completely bonkers with apartment blocks set onto land like lego blocks.

The biggest attractions here are the Kolding Castle at the top of the town and the  Trapholt Museum, with a beautiful view overlooking the city’s fjord. Here you will find a modern art museum built around designer Arne Jacobsen’s house, summer-house and an exhibition on chairs, for which Jacobsen is best known for.

Taking a walk to the fjord from the museum you will come across some of the swishest  houses we found in Denmark who, like Jacobsen, build their own unique houses overlooking the water. Each house has its own qualities with crazy designs, James Bond style security and a stunning view. It is here that I find an empty plot of land and immediately start thinking about the innovative design I would have for my own home by the fjord.

As amazing as driving in Denmark had been, it was not until my last day that I was completely taken aback and moved by one man’s story. Over the days I had picked up a brochure which featured the Frederikshab Mill Park – which has nine mini windmills and two watermills built on a farm.

“Brilliant I thought. That sounds perfect. We can pop in on the way back to the airport.”

Little did I realise that these windmills were built in a man’s very large  back garden. As we parked the car a man in paint covered clothes runs over. We soon realise he can only speak Danish and German, and we speak neither, except for the odd German words I learnt at school 15 years ago and the minimal Danish we had picked up in the last few days.

Somehow we managed and communicated and 80-year-old Gunnar Nielsen spoke excitedly about how each windmill works, the people who have been to visit before and how he has been making the windmills since he retired. He had no reason to do it, nor does he charge you to see them, but he made them as a hobby and now shares his love of windmills with other people. The colourful buildings are his pride and joy and that shines through in the way he tells you about each one and demonstrates how they work.

As his first visitors from England we signed his guest book and then went on our way leaving a little bewildered by what we had seen and heard but also impressed and massively inspired.

This was probably the best way to end our trip. I still cannot believe a man like Gunnar can put so much effort into something relatively useless like a windmill but he does it because it makes him happy. And for the 30 minutes we stood talking and miming ridiculously to him about his work, he certainly made me smile too.