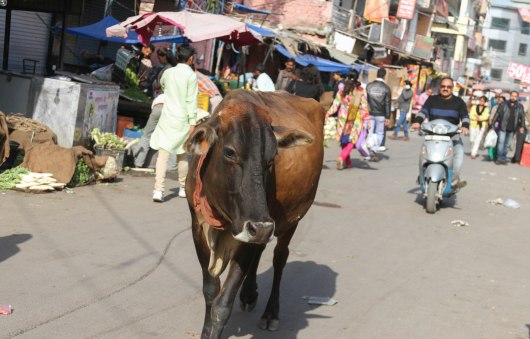 CONSTANT traffic and horn beeping are synonymous with India’s big cities and Delhi in particular.

But it soon becomes like a constant ring in your ear and you become almost oblivious to it. Within a day we had even become accustomed to the sheer lack of a Highway Code and people’s inability to use a pavement. There’s no rules of the road here and despite traffic police stationing themselves at major junctions to stop pedestrians crossing through moving traffic, their cries go ignored.

In fact Delhi-ites rarely stick to rules. Fairly quickly we realised it was almost impossible to expect them to be on time or even wait in line for anything. Men urinate on the side of the road if they want, people pile into cars and trucks and even ‘Do Not Honk’ signs across the city are ignored.

In restaurants, you might have reserved a table but it’ll most likely be given to someone else while you’re waiting, don’t expect them to actually serve items written on the menu either and they’ll probably clear the table before you’ve even finished eating anyway.

The city’s growing Metro system offered some relief from the congestion, honking and polluted air. It is by far the quickest and easiest way to get around the city, and at roughly 70p a journey, you couldn’t knock it. Although we didn’t come across many other tourists on there and we did attract a lot of strange, sometimes confused, looks. Although Indians just love to stare in general.

Often locals would swarm around you with offers of help with directions or advice on the nearest shopping area and how to use the Metro. At times this was helpful but most of the time the information was false and they were either trying to confuse you for their own entertainment or muster up business for their taxi driving friends.

We soon saw through the tricks and armed ourselves with maps, directions and addresses before leaving the hotel. Although maps again were useless sometimes as road signs are fairly non-existent and don’t expect door numbers to go in order either

All of these quirks, while they may sound horrific to some people, are exactly what makes Delhi, or India in general, so special. It is unpredictable, a little wacky at times and you never quite know what adventure is just around the corner.

But that is the beauty of travelling to such far off places right? Never knowing exactly what madness is coming next and embracing the ways of the locals. After all, rules are made to be broken!