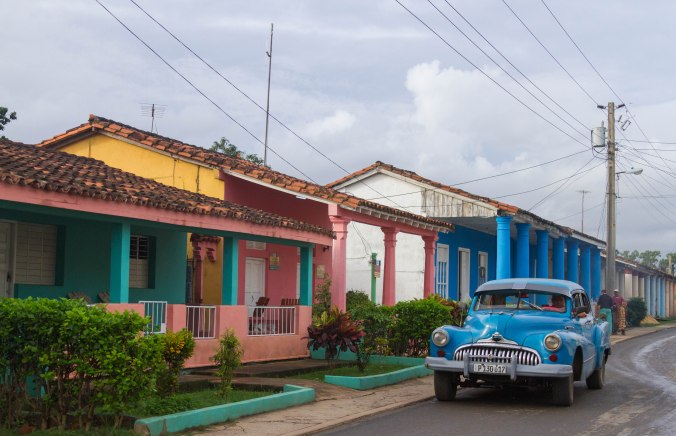 HAVANA seems to be the place to be right now but when planning my Cuba trip I knew I wanted to stay out of the typical touristy spots after leaving the city.

Ok, the towns I visited weren’t completely tourist free but they were a far cry from the bustling streets of Havana. There wasn’t a street seller in sight and you can roam around without getting hassled for a taxi.

The tour I joined took us south west from Havana, but it still only covered a fraction of the country.

Although we still weren’t short of the colour and vibrance but while there were less people and traffic, the scenery was just beautiful.

I can imagine this place is beautiful in sunshine but unfortunately it rained a lot for the two days I was there.

A UNESCO town set in between the mountains it is quaint and picturesque. The houses are colourful and restricted to bungalows so as not to spoil the view, and a complete contrast to the huge and often dilapidated buildings in Havana.

With everything on one main street you don’t have to go far for anything, and wifi is only available in the main square which sees huddles of people  gathered there throughout the day staring at their phones. It’s a funny sight to see.

Entertainment at night was at one music venue in the main square where everyone gathers after dinner for 1CUC (about 70p) and a Cuba Libre for the equivalent of £1.50. A small price to pay really, except the band is the same each night and it’s the same characters dancing in front of the stage, and dragging up members of the audience.

This was a convenient stop off point for our tour and a chance to see a cigar factory and rum factory in action.

The cigar factory was all very top secret though with cameras and bags forbidden inside. Probably to keep their techniques under wraps and stop people stealing.

It was fascinating to see the factory in action.

Each cigar is checked for quality and perfection so there is a pressure for workers to be their best.

The rum factory was similar with everything packaged and labelled by hand. There are very few machines at these factories which keeps people in jobs.

Thorough processes for both factories and stringent quality checks just shows how much national pride there is in Cuba’s two biggest exports and there is a strong reputation to be upheld.

I knew very little about this coastal town before I went out to Cuba, but it is the home of the Scuba Diving Centre, stunning sunsets and beautiful beaches.

The centre is housed in the area’s only hotel at the end of a quiet and secluded road.

There are no public buses that come here and it’s a long way from anything so you need your own transport.

But what you do get in return is plenty of wildlife, snorkeling in the Caribbean Sea for the non-divers like me and, 0f course, diving.

At the end of the day it was nice to relax at the bar with a mojito in hand and watching the sun go down, followed by a night playing dominoes into the early hours.

On the long drive back to Havana we stopped at another remote town which didn’t seem like it saw many tourists from outside of Cuba.

This area, said our tour guide, was an exclusive place for Cubans to visit on their holidays.

We were told it was a 4* hotel but the rooms were very basic and dated and made the casas we had stayed in seem like a luxury.

We were however in beautiful surroundings, with the pool set between mountains and just a short walk away from botanical gardens and waterfalls.

This was again another unspoilt town surrounded by greenery with houses built between the terraces and valleys.

It is so quiet you can hear a goat bleeting from miles away and the sound of children playing, and it’s bliss not hearing the rumble of traffic.

The day we visited here has stuck with me. It was synonymous with this fabulous country and its people and summed up my trip perfectly.

We started at 10:00 at the visitor centre which backs onto a large lake and mountains and it was here we were greeted with ‘welcome drinks’ by the bar staff and serenaded by a local band.

Thinking I was accepting a fruit juice I took a big swig and almost choked – it was a very strong rum with tropical juice!

I had barely digested my morning breakfast and here I was drinking a rum cocktail.  This was so typical of Cuba. There are no time limits of when you can crack open the rum and just about anything goes.

An hour later we were at Maria’s Cafe with stunning views over the valleys, casually sipping a rum and ginger espresso.

You could say I was on holiday so drinking that early is acceptable, but I’m not sure the locals are much different.

Cubans might have a carefree attitude to life but they know how to party and their disregard for written rules is admirable.

As relaxed as they may come across, they certainly don’t do anything by halves.

[I booked this tour with G Adventures]