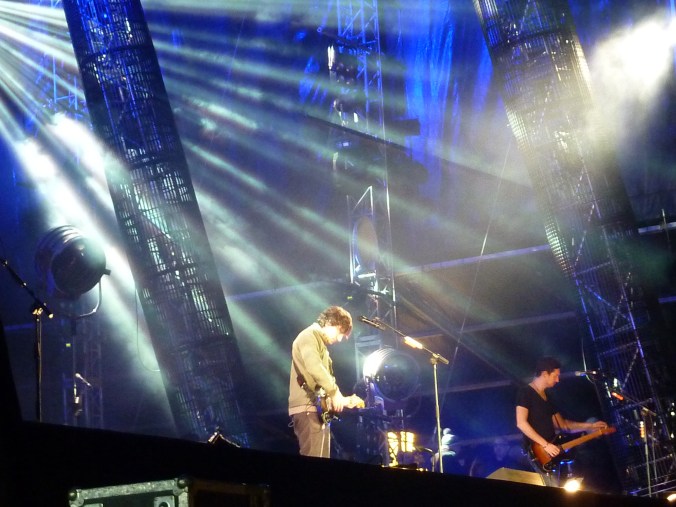 TWENTY years ago no-one would have dreamed Belfast would be attracting the huge tourist numbers it is today, let alone hosting one of the biggest music awards show in the world.

Last week saw the city completely taken over by MTV as it held its European Music Awards.
For the first time in a long time Belfast was buzzing. Everywhere you looked there were tourists, tour buses and hysterical Justin Bieber fans trying to catch a glimpse of their idol.

Even Gary Lightbody, front man of Snow Patrol was gripped by the atmosphere.

“This is the best thing to ever happen to Belfast,” he said, as he greeted an unexpected crowd of fans as they carried out a soundcheck for their show outside City Hall.
“The city is buzzing. I’ve never seen anything like it!”

In an exciting run up to the MTV awards the city held its own celebration of local music – Belfast Music Week.

Hundreds of musicians of every genre from across Northern Ireland came together to perform at Belfast pubs and music venues.

Until then I had no idea just how rich the country was in musical history.

Home to Ash, Snow Patrol, Van Morrison and punk rockers The Undertones, my eyes were truly opened to a new world of music.

For once the city has a chance to celebrate its culture and history.

Ulster Hall is a beautiful music venue and is also the place where Led Zepplin gave Stairway to Heaven its world premiere. But as many locals recall, there was a time when pop stars, drama productions and tourists didn’t visit Belfast for fear of getting caught up in the conflicts.
For years people in the city were deprived of the arts but things have certainly moved on.

For my first night in the city I headed to Ulster Hall for an Alzheimer’s Society charity gig organised by Ash frontman, Tim Wheeler, and Divine Comedy singer, Neil Hannon. I had a brilliant time partying with thousands of ageing music fans and it was fantastic to see the two bands performing some of their hits together.

Headliners, The Undertones, even brought the two organisers out for a superb encore of Teenage Kicks.
On Saturday night three of Belfast’s coolest venues, Spring & Airbrake, Katy Dalys and The Limelight linked up to host Belfast Calling.

With three stages in each venue there was back to back music from 8pm until 1am and I loved it.
We rarely had to leave a room or move away from the middle of the room as we just pivoted every half hour to get a good view of the stage. Among some of the best of the crop on offer on the night was Belfast’s most dapper singer/songwriter John D’Arcy. Producing a list of catchy and witty pop tunes the music was as bright as his ruby red suit. Others to get the crowds going were Levity Brakes, the bizarre Duke Special and the almost eerie  sounds of Captain Kennedy whose clever cover of Rihanna’s We Found Love was still ringing around in my head the next day.

The highlight of my night was James Walsh’s performance as he treated us to Starsailor hits as well as songs from his solo project – Live at the Top of the World.

He was thrilling to watch live, the crowds loved his solo stuff just as much as the songs they knew from Starsailor and he even performed a cover of Prince Raspberry Beret so got top marks in my books.

For a week Belfast seemed to find unity and peace in music. Whether you were young or old, a punk rocker or classical lover, there was something to keep everyone’s ear drums happy.

The plethora of talent on show proved that Northern Ireland has more to offer than just Snow Patrol and it is determined to place itself on the musical map, putting its blighted history firmly in the past.